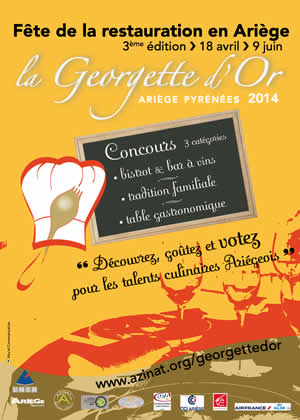 Under the effigy of an original cutlery created in Ariège, the Georgette, the IMH09 and its partners; the Ariège Chamber of Commerce and Industry, the General Council through the Ariège Tourist Development Agency (ADT) and the tourist offices, the Chamber of Trades, the Chamber of Agriculture, Radio Montaillou Pyrénées, Air France, the Caisse d'Epargne and Azinat.com propose to discover the culinary talents of the Ariège catering industry from 18 April to 9 June 2014.

It was during the Azinades at the 2011 festival of flavours, where the Georgette was presented by Azinat.com and Jean-Louis Orengo, that the idea germinated in the mind of Bernard Garcia, president of the UMIH.

The "Georgette d'Or" is part of a tourism development dynamic, and will create a commercial activity among restaurant owners at the very beginning of the summer season. Each participant will also have to show how he or she knows how to use local products and transform them in an original way.

The operation, which from the point of view of the calendar is still "out of season", seeks the involvement of the Ariegeans and tourists to promote Ariegean cuisine.

This catering festival will take place in the Ariège department from 18 April to 9 June 2014. It is aimed at three categories of catering businesses that have the promotion of local products in common.

A special "Georgette" dish or menu must be produced and offered during the operation (lunch, evening and weekend). It must consist of a starter, a main course and a dessert for the last two categories.

In order to make the action more dynamic and to create interest among consumers, whether they are tourists or Ariegeans, customers will be asked to participate by giving their opinions.

This is how this animation is positioned on school holidays in April to become a tourist event.

Customers who order the special "Georgette" menu will be given a satisfaction form in which they will rate the restaurant's performance according to a predefined grid. They will have the opportunity to give their opinion via the Internet on the operation's website, or by posting a ballot.

A jury of professionals, in addition to the public votes, will be responsible for rating the participating establishments according to the following criteria: the creativity and originality of the menu, the authenticity of the products, the highlighting of the special "Georgette" menu, the welcome, the atmosphere, the quality/price ratio, etc.

To date, some forty restaurant owners from all over the department have responded to the UMIH 09's call and have registered in the three categories proposed

The organisers and partners

The organiser of this event is the Union des Métiers et des Industries de l'Hôtellerie de l'Ariège (UMIH 09), in partnership with :

This year the sponsor of this third edition, the chef JEAN CAZORLA from saveurs du manoir in TARASCON sur ARIEGE, will welcome us for the closing evening, with the TABLES d'ARIEGE team, on Monday 16 June in the prestigious setting of the PARC DE LA PREHISTOIRE.